While our district is often praised for it's shopping opportunities we don't forget that it is also a historic part of the city of Hong Kong with a vibrant multicultural, multi-faith community which means there are many interesting sights to be seen within the area.

Although the bay and the causeway which give the district its name have long since gone, obliterated by reclamation, there is still a coastline and beside it is the Causeway Bay Typhoon Shelter, one of the few remaining places were you can see the old style residential fishing boats which once were a main stay of the economy of Hong Kong, and an important source of food!

First established in 1874 the shelter has moved gradually north over the  years since as the land was reclaimed from the sea, and shrunken in area considerably as the fishing fleet of Hong Kong first moved to other shelters on the south side of the Island at Aberdeen, and later shrunk due to the fishing industry moving to other parts of the South China Sea.

As well as the small number of fishing boats still remaining there, mostly now used exclusively as residences for the fisher folk as no inshore fishing is now performed in Hong Kong, there are also plentiful high end Yachts as just beside the shelter is the Royal Hong Kong Yacht Club, one of the few institutions to have maintained the "Royal" title in the post-colonial Hong Kong.

With a rich history going back at least to 1890 this once colonial institution is now part one of the elite clubs of the region which is open to all with an interest in Yachting.  The clubhouse is on Kellett Island, which was once a real island but is now connected by reclaimed land to the rest of Causeway Bay.  Previously the clubhouse had been at the end of Boat Street on what is now Electric Road, in an Arts and Crafts style mixing European and Chinese architecture elements, and is now the Oi! Cultural Centre.

Overlooking the shelter is the famous Noon Day Gun, made famous by the song about "Mad Dogs and Englishmen" which recounts how the gun is fired once a day as a time keeping signal.  For over a hundred years the gun has been fired daily by a representative of the Jardine Matheson Company.

Inland from the harbour is Victoria Park, one of the great green lungs of the city which provides not only recreational space on a daily basis but also a location for major events.  The Luna New Year Fair held yearly in the park is one of the highlights of the year and crowds and queues form in such numbers that police controls are required.  The yearly Hong Kong Flower Show is almost as popular with displays both commercial, hobbyist and amateur at all levels attracting a wide ranging crowd into the park.

On regular days the jogging track, lookout hill, the model boating pool and the swimming pool are regular attractions.  Two separate children's playgrounds with extensive climbing frames also contribute to making this a family friendly location.  During the weekends the park entrance plaza is a popular meeting points for Indonesia domestic helpers who create an ongoing party atmosphere for much of the day with music, dance and ethnic foods.

Also in the area

Times Square may just be another giant shopping mall and office tower, but that doesn't stop it being a place to congregate and to explore the microcosm of Hong Kong that is Causeway Bay. With marble and glass fronted shops, high end boutiques, food courts and restaurants from around the region and the world you'll find plenty to explore within the building itself.

But go just behind the Times Square complex itself and the options branch out amazingly, go under the flyover to enter the world of the traditional Wet Market where live fish and fresh meat are sold beside vegetables, fruit and dried goods. 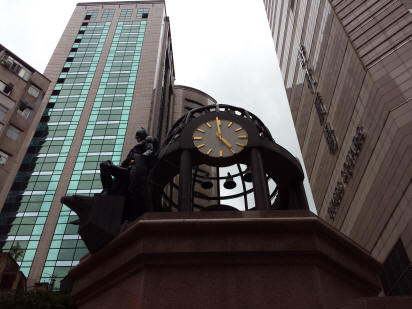